A named set is a Multidimensional Expressions (MDX) expression that returns a set of dimension members. Named sets can be created at cube level or within an application such as XLCubed. They can be created combining cube data, arithmetic operators, numbers and functions.

From v6.5 two new options, Between and Manual MDX , are available on Advanced tab > Member Set (

This option allows the user to report for a particular range on that hierarchy.

The only criteria is that both members have to be at the same level. 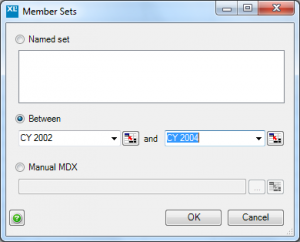 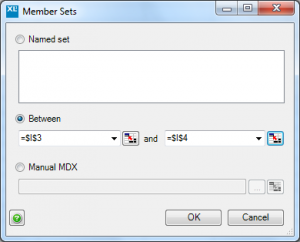 Another feature of using the range option is that you can choose to leave one of the ranges blank.

This option allows you to use MDX code – click on the ellipse to the right of the Manual MDX radio button and you will be able to enter MDX code in the following window: 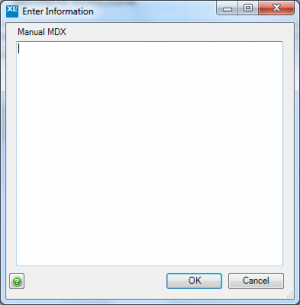 For example if you only want to report CY 2002 and CY 2004 you would enter {[CY 2002], {CY 2004]} in the Manual MDX window. You can also specify an Excel cell range as the MDX source. Once you have defined your named set you can then select to report Descendants, Lowest Descendants or Descendants At.