When drilling down to the next level of detail contained in a hierarchy XLCubed grids can be set to behave in one of three ways. The setting can be changed either from the grid ribbon as shown below, or in the properties for the individual grid. 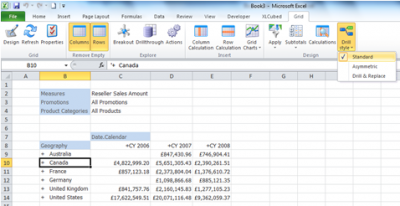 Standard is the default method, and is best described as ‘Drill and Expand’. In the example above, drilling ‘Canada’ will insert additional rows beneath the Canada member to show the provinces, while still displaying the other countries. The before and after is shown below:

This mode only shows two levels of hierarchy, the drilled member and the children, as shown below. You can double click the parent to drill back up a level.

This mode behaves in the same way as standard while there is only one hierarchy on the axis. The behaviour differs when there are two or more hierarchies on an axis. For Standard, when an inner hierarchy is drilled, it is expanded for all the ‘outer’ members, whereas for Asymmetric it is expanded just for the outer member which was in context. This is shown below, where the ‘Bikes’ member within Canada will be drilled. 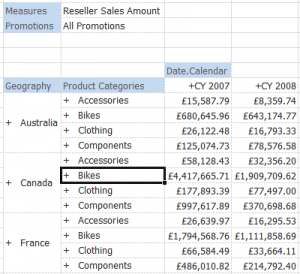